Our Teen Space is rarely empty at the end of the school day.

Here’s just a sampling of what you can do:
Hang out after school with your friends.
Enjoy a game at our chess table.
Play one of the many other board games we have stored in the ottoman.
Participate in our weekly “Teen TGIF.” (Complete with snacks.)
Talk with one of our reference librarians about a homework assignment.
Find your next favorite book in our growing Young Adult collection.
Read a magazine.
Plug in earbuds and watch a movie.
Take, edit, and print photos of your friends.
Play with our pebble pillows. 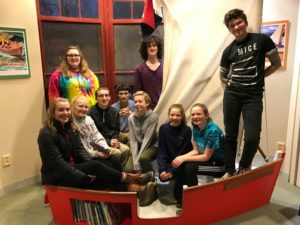 We haven’t done a round-up of YA book-to-movie releases for several months, so there is quite a list here. The studios of the big streaming services seem to have fully recognized the eager audience for YA adaptations, and there are a good number of adaptations already released or in production. So, without further ado, here are the releases since our last round-up, in order of their release dates:

The Map of Tiny Perfect Things
Based on the short story by Lev Grossman published in the anthology Summer Days and Summer Nights: Twelve Love Stories edited by Stephanie Perkins
Released on Amazon Prime on February 12

Shadow and Bone
Based on the Shadow and Bone trilogy by Leigh Bardugo
Released as an 8-episode series on Netflix on April 23rd (Production on a Season 2 is already in the works!)

Monster
Based on the modern classic Monster by Walter Dean Myers
Released on Netflix on May 7 (after many, many delays…)

Fear Street
Based on the essence of the 50+ novels in the Fear Street series by R.L. Stine
Released on 3-part series on Netflix on June 28