Pride Month: Why Isn’t There More Queer History in Archives? 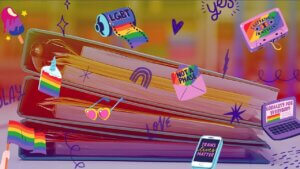 During his education as a librarian and archivist, reference librarian Jack Martin researched the existence of Queer history (or LGBTQIA+ history) in archives and collecting institutions like the History Room. We like to share items from our collections that relate to current events and national observances, but we found ourselves coming up short for Pride Month this June. Below, Jack reflects on why Queer history seems to be missing, and how we might make it more visible.

Why Isn’t There More Queer History in Archives?

It’s a question that has often been asked in recent years, both within the archival community and from outside it, and the answer is a fairly complicated one. The first part, which is perhaps the most obvious, is that, for the longest time, queer history simply wasn’t well documented, which poses a challenge to archives that work mainly to collect and preserve various kinds of documents. While there have always been queer individuals, historically many would have been reluctant to commit their identities to words for fear of persecution (or prosecution). There’s also the matter of items like marriage records, which attest to the legal marriage of a couple, but offer no indication of whether or not the match was actually a kind of lavender marriage (with the uncertainty having been the entire point). Additionally, the documentation of queer history that does exist tends to be of a negative, institutionalized slant. Some of the most abundant records concerning queer identities in previous centuries are arrest records from police raids on clubs and bathhouses. These records do little to tell us about the lives of the individuals or how they really expressed themselves, and instead document the history of prejudice more than anything else.

There also aspects of the problem that are more specific to archival practice though. Effective archiving requires effective cataloging, and effective cataloging requires the use of a controlled vocabulary. A ‘controlled vocabulary’ is a bit of library science jargon that essentially means a list of words members of the profession have agreed have specific meanings in the context of their work. If you remember old card catalogs, think of what a nightmare it would be if books on “vernal pools” and books on “swimming pools” were filed together under “pools”! While there have been some attempts to establish a reliable controlled vocabulary for terms related to LGBTQIA+ identities (such as the Homosaurus) these still present challenges. A significant aspect of celebrating LGBTQIA+ Pride is celebrating individual identities, and there are many individuals who reject or are opposed to certain labels. Even the use of ‘queer’ as an umbrella term for the whole spectrum of LGBTQIA+ identities is a bit of a contentious issue outside of academia.

We also run into issues with retroactively applying labels to individuals who did not or often could not have identified with a given term, and coupled with a lack of concrete documentation, we are often working off little more than hearsay anyway. This is an especially problematic issue for archives as institutions, as according to professional standards, the job of archivists is to preserve and provide access to materials, not to interpret them. Of course, ‘interpret’ is a pretty vague term and the line is often hazy. If we receive a letter wherein a man seems to be refer to another man as a romantic partner, but doesn’t explicitly refer to their relationship as being romantic, should we include a subject tag about homosexuality or queer identities in the catalog? Conventional ‘best practice’ for archiving would say that we shouldn’t, but there has been increasing pushback against these ideas. If we refuse to engage in any level of interpretation where minority identities are concerned, are we facilitating or participating in the erasure of queer history? Unfortunately, it’s a question that has no easy answer because it must always be followed up with, ‘How far would be too far?’

The purpose of sharing these challenges isn’t to try and make excuses for why our current resources concerning LGBTQIA+ history are rather lacking. Rather, we want to be open and honest about the challenges we’re facing in bringing this history to light and some of the questions we’re grappling with. It’s also something of an invitation to the community to offer input in the process. What are the best ways to handle this material sensitively? Is there a general consensus around what terms we should use or avoid? Are there materials documenting local queer history they’d be willing to share or like to see preserved? We would appreciate any input that could help us to make archives a more welcoming, inclusive space that document the full breadth of the human experience, rather than just what might be called the norm.

Thoughts? Questions? You can reach Jack through the History Room email, history@patten.lib.me.us.