Did you know that Champions, Corporate Leaders, and Major Benefactors of Patten Free Library can request personalized research conducted by the Archivist & Special Collections Librarian? For this year of Now You’re Cooking‘s business sponsorship they requested a building history of the Bank Block (49 Front Street) and we were thrilled to dive into the archives! 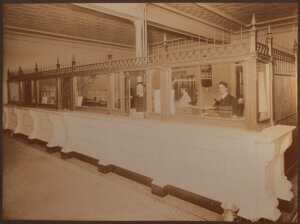 Bath’s Bank Block was built in 1859 at Front and Lambard Streets. The brick, two-story Italianate structure was one of the many buildings on Front Street built by the Moses Family, including the Columbian House, the Granite Block, the Union Block, and the Church Block. According to Peter Goodwin and Robin Haynes’s “History of Bath Maine,” the Bank Block was most likely designed by famed Bath architect Francis Fassett. Fassett was a deeply influential architect who is credited with designing the Winter Street Church Parish Hall, the Church Block, the Sagadahoc Courthouse, the Hyde Block, and the Lincoln Block1.

According to a 1980 Sagadahoc Preservation Inc. survey of the building, by 1863 four banks occupied the second floor and Bath National Bank occupied the street floor2. In The Edward Clarence Plummer History of Bath, Maine by Henry Wilson Owen, Owen writes that Bath Bank was chartered in 1855 and reorganized as Bath National Bank under a federal charter in 1865. Among their many presidents were notable Bath residents Freeman Clark and William D. Sewall of Clark & Sewall shipbuilding fame. Bath National Bank called the Bank Block home until building its own structure across the street at 40-42 Front Street in 19103. In 2022, this is the present location of Key Bank

Soon the banks were not the only occupants of the block. An early rendering of the Bank Block can be seen in an 1873 Globe Insurance map in the Board Room of the Patten Free Library. In the detail of the map in figure 3, the street level tenants are shown as Books Bookbinds, Grn., Bank, and Bank, with offices upstairs for C.M. Plummer Insurance Agents. Contemporary city directories list other 19th century occupants as Thomas G. Knight and W. Scott Shorey, both book binders and manufacturers, Hyde & Gay Druggists & Apothecaries, Mrs. E. A. W. Rouse Fashionable Milliner and Dealer in Fancy Goods, Physician E.P. Roche, Counselors Tallman & Larrabee, and more. Advertisements for these businesses can be found splashed across the pages of the Bath city directories in the History Room. Shown below in figure 4 is an advertisement for Mrs. E. A. W. Rouse Fashionable Milliner and Dealer in Fancy Goods from the 1867-1868 Bath, Brunswick, and Richmond Directory5. Note that in both the 1873 Globe Insurance map (figure 3) and in the below advertisement (figure 4) the street numbers do not yet correspond to today’s numbers. It is not until the 1890 Sanborn map (figure 1) that the numbers begin to look more like today’s address – 45, 47, 49, 51, and 53.

Change in the 20th Century

Other 1902 occupants of the building include Macaulay Brothers lunch room sharing a storefront with the railway waiting room, and at 53 Front Street (presumably the offices on the second floor) were Worumbo Manufacturing Company, Galen C. Moses, Oliver Moses, attorneys Charles W. Larrabee, George E. Hughes, Edward C. Plummer, the Atlantic Carriers Association, insurance agent F.J. Hinckley, and George Fisher (profession not listed). By 1905, the Bath city directory lists many of the same occupants with the new addition of the Sagadahoc Real Estate Association, who came to own many of the buildings in Downtown Bath including the Bank Block10. By 1910 both Bath National Bank and First National Bank had moved to their new locations across Front Street and the primary occupant on the street level was the Woolworth Co. store and the passenger waiting room for the Lewiston Augusta & Waterville Street Railway.

Nearly ten years later in 1919, Woolworth Co. and the railway waiting room were joined by a 5 & 10 Cent store in between the two. Sharing 51 Front Street with the railway waiting room was The Swastika Exchange, a gift shop selling Quaker and Elyria specialty knit items11. Throughout the rest of the 1920s, the block remained unchanged but by the publication of the 1933-1934 city directory the railway waiting room had closed, signifying the fading of the street railway business, and had been replaced by Edmund M. Staples drugstore12. The 1930s saw very little change to the occupants of the block, possibly a result of the Great Depression.

By 1967 Richards Restaurant had been replaced with the Royal Palm Restaurant, and Shaw’s Bookstore remained the other storefront on the block15. However, by the 1971 directory Shaw’s Bookstore was joined by quite a few new street level occupants including the Bath Area Chamber of Congress, the Bath Area United Fund Inc., and the Bath-Brunswick Times Record newspaper16. In 1991 a children’s clothing store called Animal Crackers took up residence at 51 Front Street17, but was replaced in 1997 by Bath Jewelry18. In 2001 long-time occupant Shaw’s closed their business for good and left the block19.

On May 10, 2000, a new occupant joined the block at 49 Front Street: Now You’re Cooking. Today, Now You’re Cooking occupies the entire street level of the Bank Block. Although the walls of the Bank Block have seen dozens of occupants since the 1860s, the building remains the same stately Italianate developed by the Moses family, upholding Bath’s cultural heritage along Front Street with its contemporaries. 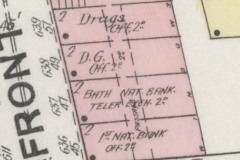 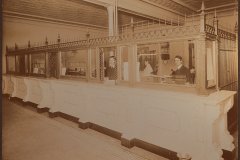 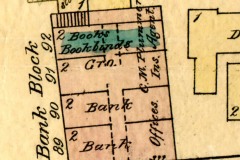 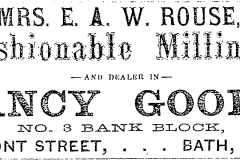 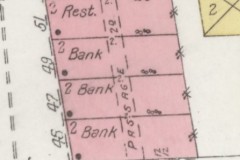 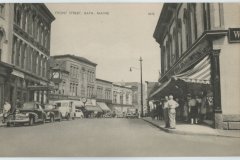 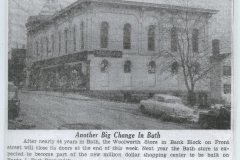