POTUS = President of the United States 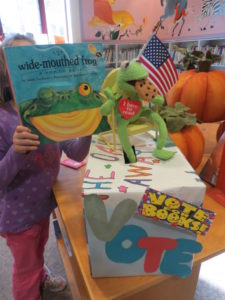 Visit the Children’s Room and drop your vote in our Ballot Box…for your favorite book and author! While you’re here, take home some books from our display to learn about elections and voting. Kids, here’s a great online site to help you learn about the Presidential election process and meet the candidates! Check out or reserve some books:

When Penny Met POTUS by Rachel Ruiz
Penny doesn’t know what POTUS means. So, she tries to figure it out while she’s with her mother at work. The fantastic surprise ending is that POTUS is the president of the United States and it’s her mom!

Grace for President by Kelly S. DiPucchio
Grace can’t believe that no girl has ever been president. So, she decides to run for class president at school. Through her adventures, you’ll learn about how the election process works, including the electoral and popular voting.

My Teacher for President by Kay Winters
Oliver tries to get his teacher to become president by writing a letter to a local television station.

Monster Needs Your Vote by Paul Czajak
Monster searches for a reason to run for president and tries to figure out why people should vote for him but discovers that he’s much too young.

President Squid by Aaron Reynolds
Squid  wants to be president for all the wrong reasons which will get you thinking about what you would do for the Country, if you became president of it.

If I Ran for President by Chaterine Stier
This informative book’s about the ins and outs of running for president, detailing the long campaign road to the debate to actually winning.

Madam President by Lane Smith
If you love books by Lane Smith, you’ll love this humorous book about a little girl who pictures herself in the White House, as president.

If I Were President by Catherine Stier
Realistically, what would it be like to live in the White House? What would the daily tasks be like?

Duck for President by Doreen Cronin
Duck really believes that being President of the United States would be simpler than running a farm.

So You Want to Be President by Judith St. George
This book became the 2001 Caldecott Medal Book Award winner and describes, in a humorous way, what it’s like to be president.

Bad Kitty for President by Nick Bruel
Bad Kitty fans are going to enjoy checking this one out!

The Kid Who Ran for President by Dan Gutman
Judd begins a campaign to be president of the United States and promises lots of silly things. In fact, he has chosen his babysitter to be his running mate and his political party is The Lemonade Party.

President of the Whole Fifth Grade by Sherri Winston
The girl in this story wants to be president of her 5th grade but she takes lots of short cuts that prove to be disastrous for her campaign and it all backfires on her.