I’m sure I’m not introducing anyone to Jon Klassen and his immediately classic hat trilogy so let this instead just be a declaration of love for these books. I ask you: Is there a better children’s book formula than a couple of deadpanning animals making questionable decisions about hats? (The answer might be no.)

Flatly hilarious delivery aside, let’s take a moment to admire the artwork of these books. I mean, come on: 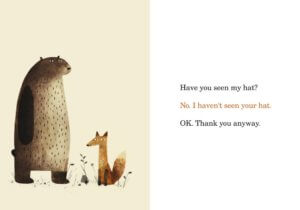 This is Not My Hat and I Want My Hat Back both deal with the consequences of taking a hat that doesn’t belong to you. The consequences are serious; Klassen feels strongly that hats belong with their owners. (Then comes We Found A Hat…SPOILER ALERT: No punishment here. The hat envy all works out)

Klassen’s books are ideal for early readers; the text is large and minimal and they have a lot of Margaret Wise Brown-like word repetition. They also have a Maurice Sendak-like vibe in that the consequences for hat theft are vaguely brutal but Klassen, like Sendak, trusts that kids can handle it.