My Account
Patten Free Library > Kid's Blog Posts > And the winner is…? | Posted by: Lesley Dolinger on January 8, 2015

And the winner is…? 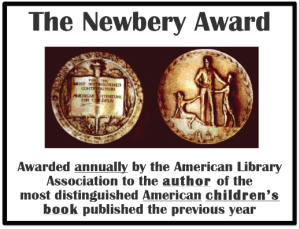 Do you know there’s a “best children’s book of the year” contest going on right now? Actually, there are lots of children’s books in many different categories about to be awarded. The top and, probably, the most famous one is the Newbery Medal Award for older kids’ books. It’s right up there with baseball’s World Series or the Academy Awards for movies. “The Newbery Medal was named for eighteenth-century British bookseller John Newbery. It is awarded annually by the Association for Library Service to Children, a division of the American Library Association, to the author of the most distinguished contribution to American literature for children.” Carefully chosen committee members spend a great deal of time book-talking and trying to discern which one of the 2014 published titles is worthy of this mighty award. Pretty soon, one winner and several honor (runner up) books will be selected. We’ll all be in the know February 2 when the announcements are made. After that, look for that special Newbery Award book seal, a round “metal” sticker mirroring the real thing. These winners will never go out of print.

Just for fun, take a trip to the Skidompha Public Library in Damariscotta where you’ll find a cool display, dedicated to well-known children’s author and illustrator, Barbara Cooney, who lived in the town. The case contains photos, sketches, and her two Caldecott medals. The Caldecott medal is awarded to an artist of the most distinguished American picture book for children.

What was your favorite new book from 2014? There are many “mock Newbery book clubs” around schools and libraries across the Country. I think this one is really worthwhile checking out to help you with your nomination. I read zillions of children’s books throughout the year and have some fun trying to pick a winner which is always hard to do. Sometimes I’m spot on, sometimes not. So, here are your children’s librarian’s out-on-a-limb three picks for ‘the real deal’, ‘the golden crown’, ‘the to-be-classic’, ‘the top dog’ books ~drum roll please!

Rain Reign by Ann Martin is about a high-functioning autistic girl who’s obsessed with homonyms (words that sound like one another but have different meanings), following rules, and her dog Rain. Ann Martin ‘s newest book goes way beyond her Babysitter’s Club series from years ago. She became highly acclaimed after winning the 2003 Newbery Honor Book Winner for writing, Corner of the Universe.

The Night Gardener by Jonathan Auxier is a really well written, creepy Victorian ghost story, an allegory on greed and the power of stories.

Brown Girl Dreaming by Jacqueline Woodson a memoir written in poems, about a young black girl raised in South Carolina and New York City. I read it immediately over my winter vacation. Each page was as enthralling as the last.

Others that had lingering effects on me were Nest by Esther Ehrlich, El Deafo by Cece Bell, Fly Away by Patricia MacLachlan, The Red Pencil by Andrea Davis Pinkney, and Absolutely Almost by Lisa Graff.

Time will tell ~  I’ll return with the results next month! Until then, happy reading!

P.S. Today is Feb 10 and, as promised, I’ve returned with the awards results and the winner is… PRESS HERE!