My Account
Patten Free Library > History of the Library

History of the Library

The Patten brothers, George and John, were generous subscribers to the Patten Library Association, which was founded in 1847. The subscription library kept its collection in rented rooms and later a donated house until Galen C. Moses gave $10,000 for the construction of a new library building, with the stipulation that its use be free to all Bath citizens. 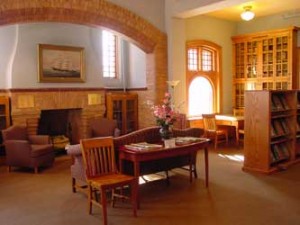 Children services were first offered in 1911 in the second floor tower room, which had been previously occupied by the Sagadahoc Historical Society.

In 1961, through the generosity of Mildred Wright, a new wing to the library offered its greatly expanded number of users a new Children’s Room, lobby, auditorium, and Reference Room.

A second major addition was completed in September 1998. It includes an expanded children’s and young adult’s areas, nonfiction stacks, and a new History & Genealogy Room. The original 1890’s building was restored.