New Shades of Blue in Concert 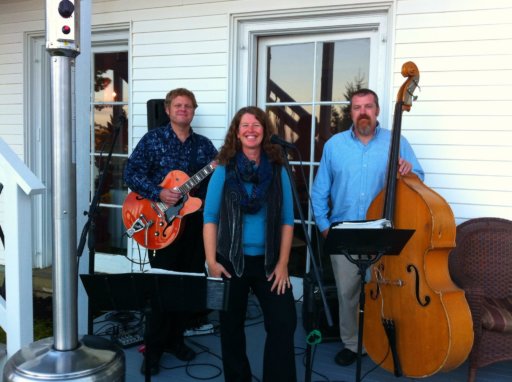 Juliane Gardner & Christopher Poulin began playing together in college when they met as students in a Jazz and Contemporary Music Program. They continued to perform together in various groups until the band was formed in its present configuration. Since then New Shades of Blue has enjoyed a playing schedule up and down the coast of Maine and New England. They please audiences with an eclectic mix, from old time jazz favorites to originals, some blues and sometimes even reggae based originals…The core of the band is Juliane – lead vocalist & keyboards – and Christopher – lead vocals, guitar, & flute. You can often hear the duo expand to a band with their super talented friends who join them on many performances and recordings.

Juliane Gardner began singing for large audiences at the age of five, acting and singing in musicals with local theater group, Cold Comfort Theatre, where she honed her performance skills for twelve years.  In her late teens she started fronting local bands and while in college at UMA, studied vocal jazz performance with artist in residence, Marguerite Juenmann. Because of her father’s love for jazz, at a very early age she was introduced to and eventually emulated jazz greats such as Carmen McRae, Nina Simone, Ella Fitzgerald, LHR, & Thelonious Monk. Juliane is also influenced by singer/songwriters such as Paul Simon, Patty Griffin, Ani Difranco, Martin Sexton & James Taylor.

Juliane has shared the stage with Chris Smither, Jessie Winchester, and Noel Stookey. In 2007, her single called Love and Comforting, a sparse blues featuring Chris Poulin, was selected for inclusion in a nationally syndicated ABC TV series Men in Trees airing in the spring of 2008. In 2010 she formed the group New Shades of Blue with her longtime friend and now husband, Christopher Poulin.

Christopher began playing guitar at the age of 9. At this young age he wore out the needle on his first record player while listening to the Beatles. Chris went on to get a Bachelor’s degree in jazz from UMA, and a Master’s degree in jazz and classical guitar from Youngstown State University in Ohio. While at YSU, Chris, (together with the YSU Big Band), won an award in the jazz world’s premiere magazine, Downbeat, for the best college big band in the US.

Chris is a sought-after performer in many musical circles in Maine as a lead guitarist and composer.  In his career he has performed with jazz great Kenny Burrell, Sean Jones, Bob Moses, James Weidman, and vocalist Deborah Davis. His influences include Wes Montgomery, BB King, Chet Baker, Nat King Cole, Eric Dolphy, and Bob Marley among others.

When Chris isn’t playing “jazz” he is jamming on a one drop, refining a Bach piece on classical guitar, & writing original compositions. We have been told he is inspired to write when he hikes mountains in the summer or skis down them in the winter. In 2016 Christopher formed an originals alter-ego band with his wife, called Positive People whose roots are in world beat, pop, and reggae.