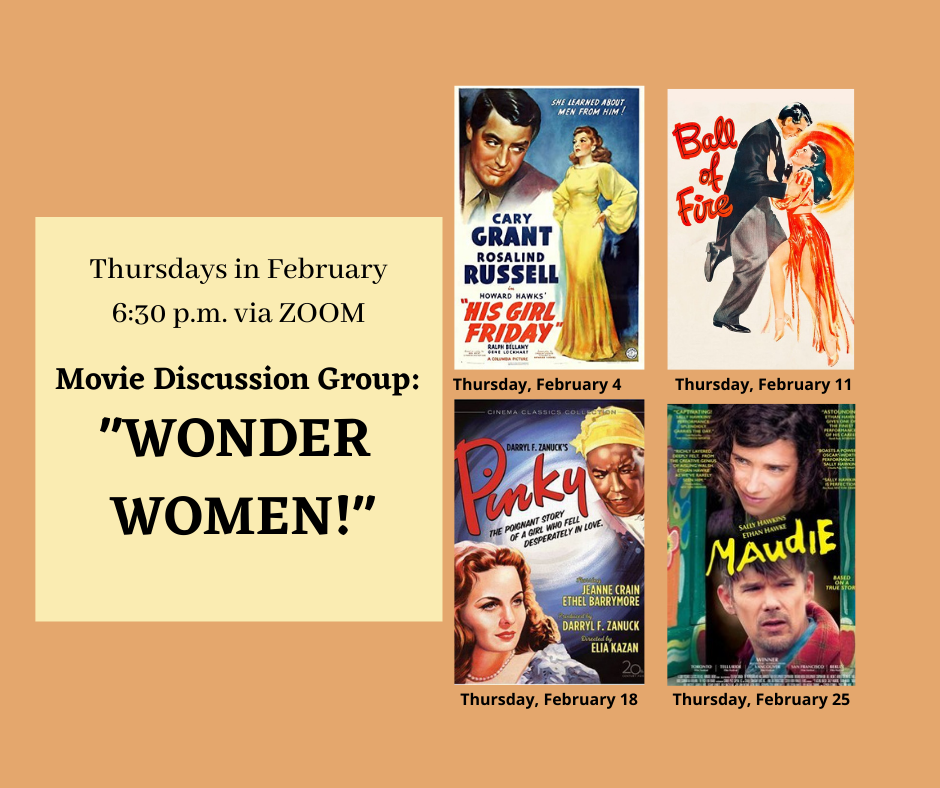 Join Patten Free Library patron and movie buff Al Fick for weekly movie discussions on Thursdays in February.  Our first series is called “Wonder Women,” and features classic movies with strong female leads. All you have to do is watch the movie before the discussion night.   All meetings in the series start at 6:30 p.m.
Here are the discussion group dates:
Thursday, January 21:
Informational ZOOM meeting about the series. Meet Al Fick, the moderator, and find out where you can find and view the movies.
Thursday, February 4:
His Girl Friday (1940), starring Cary Grant, Rosalind Russell and Ralph Bellamy.
A newspaper editor uses every trick in the book to keep his ace reporter ex-wife from re-marrying.
Thursday, February 11:
Ball of Fire (1941), starring Gary Cooper and Barbara Stanwyck.
A group of professors working on a new encyclopedia encounter a mouthy nightclub singer who is wanted by the police to help bring down her mob boss lover.
Thursday, February 18:
Pinky (1949), starring Jeanne Crain, Ethel Barrymore, Ethel Waters.
A light-skinned black woman falls in love with a white doctor, although he is unaware of her true race.
February 25:
Maudie (2016), starring Sally Hawkins and Ethan Hawke.
An arthritic Nova Scotia woman works as a housekeeper while she hones her skills as and artist and eventually becomes a beloved figure in the community.
Al Fick has volunteered to be our discussion moderator.  He is a transplant to Maine from Baltimore, Maryland.  He was born and lived there until he retired from the University of Maryland Baltimore in 2011.  He and his wife Jahn live in Bath.  He developed a love for movies as a kid at the Saturday double feature matinees – Gordon Scott as Tarzan; Audie Murphy as a military or western hero; and Lon Chaney, Jr. as The Wolfman.  He refined his tastes in movies on the repertory schedule at the Charles Theater in Baltimore and on Turner Classic Movies.  He subscribes to Films of the Golden Age magazine and, after multiple viewings of The Thin Man, still hasn’t been able to count the number of drinks William Powell, as Nick Charles, has in the film.
Want to know more? Email Roberta at rjordan@patten.lib.me.us.  Click here to get on the series email list; we’ll send you the link to the informational meeting and to the weekly movie discussions.
+ Google Calendar+ Add to iCalendar