We’ve reserved the Gazebo for a weekly drop-in Chess session on Mondays from 3 to 5 p.m. starting June 21.  It is open to anyone ages 14 and up who wants to pick up some games.  We’ll have tables and chairs and a few chess sets; please bring your own if you have a set that travels well.

Growing up, Kerri Arsenault witnessed relatives, friends, and neighbors in her small hometown succumb to cancer and other debilitating, often fatal diseases. It wasn’t until she grew up and moved away that she realized these illnesses were the direct and indirect result of the chemicals released from the paper mill where a majority of people in her hometown of Mexico, Maine, were employed.
In this book, Arsenault blends memoir, science, and history to explore the harmful effects that paper mills throughout Maine inflict upon the same communities that depend on them for economic survival. Her research runs the gamut from personal interviews with mill workers to exhaustive searches for incriminating documents in dim backrooms of government buildings. Arsenault’s search for the true impact of the paper industry intensifies after her father, who worked at the mill in Rumford most of his life, is diagnosed with cancer.
One of the prevalent themes in this book is Arsenault’s challenge to the idyllic image most people have of Maine: “In Maine, we clear-cut our forests while tourists exalt them. Pollution bankrupts the fresh air we advertise. We let dioxins invade our environment, which end up in lobsters tourists eat… What gives our town life could also be what’s killing it.”
For a new perspective on the “real” Maine, an exploration of the harm our prosperous industries create, and a deeper look at the lives and struggles of the working-class within Maine’s mill towns, this book will not disappoint.

This critically acclaimed memoir has been on my “to read” pile for years.  The recent news that George Clooney is directing an Oscar-bait adaptation starring Ben Affleck made me finally crack it open.  I devoured it, and I’m truly sad that I didn’t get to it earlier.

At its core, this is a story about a fatherless boy seeking something he feels he’s missing.  JR’s mother is an incredible advocate for her son.  As many such stories go, she works hard to give JR a good life. The bond between mother and son is beautiful.  The extended family with which they live is a vibrant cast of characters – some sane, some cruel, some strong, and some tragically flawed.  One summer, JR’s mom asks her brother, who tends bar at a popular watering hole, to keep an eye on her son.  What begins as a tag-along trip to the beach for a 12-year-old with his uncle’s friends morphs into evenings at the bar as everyone gets to work.  JR immediately connects with these men; they acknowledge him in a way that he craves.  His education at the edge of the tender bar shapes much of his life’s journey.

Any story that features a bar as a major character and role model is going to include some heartache.  JR’s maturation from tween to Ivy-League student to young professional is anchored at the bar.  His concept of manliness and self-worth is so tightly tied to the welcome he receives at the bar that it inevitably impacts relationships and professional prospects.  Yet JR’s story doesn’t moralize about the pitfalls of his lifestyle.  In this memoir, life experiences are formative without judgement.

If you haven’t already caught this coming of age story, it’s a worthwhile read.  If you prefer to read the book before seeing the movie, check this one out.  I suspect we’ll be hearing more about this film in the near future.  Now’s your chance to be “in the know!”

Book Review: “The Daughters of Ys” by M.T. Anderson and Jo Rioux

The Daughters of Ys by M.T. Anderson and Jo Rioux is a stunningly illustrated mythical graphic novel fantasy about two sisters descended from a faerie mother and a prince. The beautiful illustrations are a lovely and stark contrast to the dark and sinister tale they tell.

The story is a retelling of a classic Breton folktale about the mythical city of Ys, which once sat upon the coast of Brittany but was swallowed by the ocean. Ys is a city of wealth and wonder, but has a history of dark secrets.  In Anderson’s version, Ys is built by the magic of Queen Malgven.  She and her husband, King Gradlon, have made a deal with a demon to keep the Kingdom from sinking under the ocean.

After their mother’s death, King Gradlon is lost in grief. The two sisters, Rozenn and Dahut, drift apart.  Dahut loves the intrigue of palace life. She learns about her mother’s magic and continues to uphold the agreement with the demon, under pressure from the King.  Rozenn, the rightful heir, spends her time on the moors, away from the palace, and is unaware of the deal that’s been made.  But in end, she is one who has to save the Kingdom’s people after all goes wrong.

If you are looking for a chilling fantasy to hold you over through the remaining cold, dark days of winter, I recommend giving this graphic novel a try.

This book is the result of a collaboration by seven young adult authors, all women; their work provides a very readable history of Tudor England from the perspectives of Henry VIII’s six wives. Katherine of Aragon, Anne Boleyn, Jane Seymour, Anne of Cleves, Catherine Howard, and Katherine Parr all come to life on the pages of their respective chapters. Each story is interesting in its own right; together, their individual voices form a simple but cohesive account of the relationships at the foundation of King Henry’s 38-year reign.

I love historical fiction because you can pick up so many interesting facts as you immerse yourself in the story. Did you know that Jane Seymour was idolized by Henry after producing him a male heir? She died after giving birth to his son, and Henry had her heart buried in the Chapel at Hampton Court. Anne of Cleves never consummated her marriage with the king, but lived on a generous settlement long after the annulment of her marriage, and was referred to as Henry’s ‘beloved sister.’ I also did not know that poor Catherine Howard, beheaded at just 18 years old by the jealous 50-year old Henry, was a cousin of Anne Boleyn. And I learned that Katherine Parr, the well-educated wife who survived him, served as regent, ruling all of England for a summer while Henry went to battle in France.  She also worked to bring together and educate all three of Henry’s children.

As always, a book like this always makes me wonder how much fact is integrated in the fiction. Judging from the information provided at the end of book, it appears that the stories of each queen are based on extensive research. The brief “Tudor Timeline” and a “Who’s Who in the Court” both are both helpful references.

If you love stories that make history come alive, this is a great read.

The Harry Potter Escape Room will be open again on Wednesday, July 31 between 11 a.m. and 5 p.m. Celebrate Harry Potter’s birthday with us!

‘Ragtime’ Jack has been performing for more than 30 years. He is a master of traditional country blues and ragtime & stride piano, and a powerful singer/songwriter, as well as songs from the “Great American songbook.” He also accompanies himself on the guitar and fiddle. Jack was inducted into the Old-Time Music Association Hall of Fame in 2014. Jack’s performances always include a lot of uplifting wit, historical anecdotes and connections with local lore, wherever he performs. His background in journalism amplifies a lifelong quest for the cultural framework of his music and the places he performs.

I just put a hold on this wonderful Canadian author’s newest book, Women Talking, after reading about it in The New Yorker. This, her eighth novel, was released in Canada last year and is due out in the U.S. on April 2. As in many of her books, she draws on her Mennonite heritage as a way to express outrage, humor, and melancholy (often simultaneously).

Of course, I have only been able to read about this new book, but it sounds like it will a bit of a departure from earlier works in form and tone, and will definitely channel some of Toews’ rage against her former religion. She wrote it after learning that between 2005 and 2009 more than a hundred Mennonite women and girls in a community known as Manitoba Colony had been raped at night in their homes. The horrific string of crimes stopped when two men were caught entering a home one night ready to sedate and assault more women.

The book is a exactly what the title suggests: Toews creates a book-length conversation of Mennonite women and girls talking and responding to what has happened to them and their community. I am sure it will be a very interesting and emotional read. To read the full New Yorker article about Toews and her work, click here.

If you haven’t read anything she’s written, I highly recommend some of Toews’ earlier works as an introduction to her talents.

A Complicated Kindness (2004) is a darkly humorous coming-of-age novel about 16-year-old Nomi, who lives in a bleak Menonnite community in rural Manitoba with her father. Her mother and sister have left them; the book is her bitingly-funny adolescent skewering of the eccentricities and male-dominated control of her community and its religion. This is the book that launched Toews’ career.

All My Puny Sorrows (2014) is a novel based on her relationship with her sister. (Toews has said that the novel draws heavily on the events leading up to the 2010 suicide of her sister, Marjorie.) The sisters in her story are Elfrieda and Yoli, the only children in an intellectual, free-spirited family from a conservative Mennonite community. Elfrieda is a world-renowned pianist: glamorous, wealthy, happily married, but suicidal and fragile. Yolandi (based on Toews) is divorced and broke; all she wants is to find true love and to keep her older sister alive. Toews tells the story with her usual mix of humor, melacholy, and compassion. Goodreads says the story is simultaneously “tender and unquiet,” and I agree.

To place a hold on Women Talking, click here. 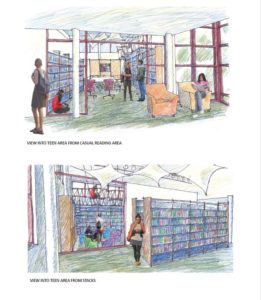 Learn more about the fundraising campaign to build a new Teen Space and renovate our Reference area.