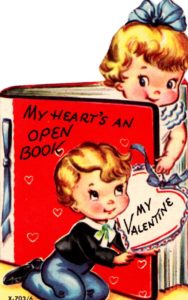 Valentine’s Day is a day of love! Here are five cozy books about all different kinds of love to curl up to with a loved one!

Otter and Odder by James Howe and Chris Raschka

One day, a hungry otter goes out for a swim to look for lunch. What he finds instead is love with a fish named Myrtle! But can an otter who naturally eats fish really be in love with one? In this silly but touching book, Otter learns that love can come in many shapes and sizes and that sometimes, all it takes is a little bit of change and compromise to make it work.

The Best-Loved Doll by Rebecca Caudill and Elliott Gilbert

In this classic story, a little girl named Betsy is invited to a doll party and must choose only one of her dolls to bring. Melissa is the oldest doll, Melinda is the best-dressed, and Mary Jane can do the most things. Then there’s Jennifer, who isn’t the best at anything but who’s always smiling anyway. In the end, Betsy decides to bring Jennifer because even though she isn’t the oldest or the best-dressed or the doll who can do the most things, out of all the dolls, she’s the best-loved. This story shows that even those who aren’t the best at anything can still be the best in the eyes of those who love them.

A Hat for Mrs. Goldman by Michelle Edwards and G. Brian Karas

Mrs. Goldman knits hats for everyone in the neighborhood, and Sophia helps her by making pom-poms for the hats. But when Sophia and Mrs. Goldman go to walk the dog, Sophia realizes that Mrs. Goldman is so busy making hats for the neighbors that she doesn’t even have one of her own! Even though she isn’t very good at knitting, Sophia is determined to make a hat for Mrs. Goldman in her own special way. This book teaches a simple but powerful way to express love to those who need it most.

Worm and Worm are in love and want to be married. But all the other bugs keep interrupting them! There must be rings and cake and dancing, they insist, because that’s the way it’s always been done. Then Beetle wants to be the best beetle and the bees want to be the bride’s bees, but which worm is the bride and which is the groom? Worm and Worm decide it doesn’t matter who is who because all that matters is that they love each other. This simple but powerful story shows how love doesn’t always turn out the way it usually does but that doesn’t make it any less special.

David is getting a new brother, a baby from Korea named Jin Woo, but he isn’t so sure he’s happy about it. His parents are excited and spend days preparing for the baby’s arrival, but David can’t seem to sort out all his feelings about it. Then Jin Woo finally arrives, and David is surprised to find out that being a big brother is actually pretty cool. That night, David’s parents read him a letter they helped the baby write, and David realizes that just because Jin Woo is here doesn’t mean his parents will stop loving him. In fact, they have even more love than ever before, plenty for both boys. This gentle story about adoption reassures new big siblings that even though there’s a new baby, it doesn’t mean there’s any less love to go around.

Fox by Margaret Wild and Ron Brooks is a story of friendship, loss, and hope. A magpie with a burnt wing and a dog who is blind in one eye help each other and soon become friends. But when a jealous and lonely fox tries to separate them, Magpie learns what it really means to be a true friend. With warm, vibrant illustrations, a story that sounds like a poem, and an ending that’s a little bit sad but very hopeful, this is a book that anyone who has ever made a mistake or had to face a bully will understand.

Boats for Papa by Jessixa Bagley tells the story of Buckley and his mama, a pair of beavers who live on the beach by the sea. Buckley and Mama both miss Papa, so Buckley decides to make little boats out of driftwood and send them out to sea for Papa. Buckley thinks that if the boats don’t wash up on shore the next day, it means that Papa got them. Then one day, he finds out that Mama, who also misses Papa, has a secret. This is a gentle book about family where someone is gone away but never forgotten.

In Dear Santa, Love, Rachel Rosenstein by Amanda Peet, Andrea Troyer, and Christine Davenier, Rachel, a Jewish girl, wants nothing more than to celebrate Christmas with her other friends from school. But her family tells her they don’t celebrate Christmas. So Rachel decides to take matters into her own hands by decorating the house and writing a secret letter for Santa. But when Santa doesn’t bring her presents on Christmas Day, Rachel is sad… until she finds out that she’s not the only kid in her class who doesn’t celebrate Christmas! This is a funny and heartwarming book for anyone who’s ever wondered why some people celebrate different holidays.

In The Book Itch: Freedom, Truth, & Harlem’s Greatest Bookstore by Vaunda Micheaux and R. Gregory Christie, a young boy named Lewis tells the story of his father’s bookstore, the National Memorial African Bookstore. Far from being an ordinary bookstore, the National Memorial African Bookstore sold books by and about black people and their history and culture. It was also a place where anyone could come to read and learn. In the book, which is based on a true story, Lewis talks about the famous people he met at the bookstore and how his dad spoke up for civil rights. With detailed pictures and historical facts, this is a good book for exploring the time period of the civil rights movement.

Sand between your toes and sea spray on your nose – summer is a great time to cozy up with a good book on the beach! Whether you’re near the sea and sand or in your backyard with your imagination, check out these fun summer beach reads!

If you’re looking for:
Scary: Curl up and hold on for the night while orphaned Irish siblings Kip and Molly unravel the spooky ghost story of an old English manor in Jonathan Auxier’s The Night Gardener. Then follow best friends Zach, Poppy, and Alice as they unearth the secret of the haunted china doll known as the Queen in Holly Black’s Doll Bones.
Historical: Uncover the tragic history behind a ruined castle as two children trapped within work to repair it from the inside out in Merrie Haskell’s The Castle behind Thorns. Then follow brother and sister Seth and Abbie as they find work for a sea captain’s widow in seventeenth-century Wiscasset, Maine in Lea Wait’s Stopping to Home.
Silly: Laugh out loud along with bratty Lulu as she adventures into the woods on her own to try and find a pet brontosaurus in Lulu and the Brontosaurus. Or tag along with Jane during her wacky summer in Polly Horvath’s My One Hundred Adventures.
Friendship: Explore a North Carolina mountain valley in the 1920s with Arie Mae and her new friend Tom in our Mighty Girl Book Club book Anybody Shining by Frances O’Roark Dowell. Then follow Lily to her coastal Maine town as she befriends Salma, a Hispanic migrant worker, during the blueberry season in Cynthia Lord’s A Handful of Stars.
Mystery: Take on the case with the world’s most famous mystery-solvers in Irene Adler’s Sherlock, Lupin, and Me series. Or embark on a treasure hunt with Truly Lovejoy when she discovers an unsent letter in a first edition copy of Charlotte’s Web in Heather Vogel Frederick’s Absolutely Truly.
Fantasy: Jump into a world of fairytales with twins Alex and Connor when their grandmother gives them a magic book in The Wishing Spell, the first in The Land of Stories series by Chris Colfer and Brandon Dorman. Then sail along with Fin and Marrill as they embark on a swashbuckling adventure to recover the pieces of a magical map in Carrie Ryan and John Parke Davis’s The Map to Everywhere.
Graphic Novel: Discover the strange but friendly monster in the woods with Portia in Kean Soo’s Jellaby the Lost Monster, followed by Jellaby: Monster in the City. Or take a road trip with sisters Raina and Amara in Sisters by Raina Telgemeier, a companion to Smile.
Poetry: Follow Mina and her Japanese-American family as they’re forced from their Seattle home after the attack on Pearl Harbor in Mariko Nagai’s Dust of Eden. Then read what it was like growing up as an African American girl in the 1960s and 1970s in Jaqueline Woodson’s autobiographical Brown Girl Dreaming.
Nonfiction: Experience the true story of Malala Yousafzai, a Pakistani girl who was shot for standing up for girls’ education and survived in her autobiography I Am Malala, coauthored by Christina Lamb. Then step aboard the doomed Titanic and witness the disaster through the eyes of a boy’s toy bear in Polar the Titanic Bear, written by Daisy Corning Stone Spedden, an actual survivor of the shipwreck. 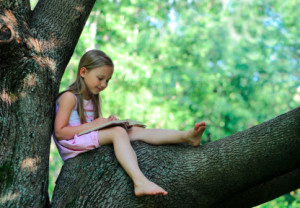 Little girl with a book on a tree branch